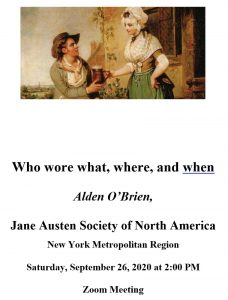 Jane Austen wrote some memorable opening lines. We invite you to write an opening line or lines — no more than three, please — for a  novel she never wrote.

The responses from thirteen of the fifteen groups: (the numbers do not correspond to the group numbers)

a) The fortunes of the Manwaring family rest anxiously on his sickbed.

b) Happiness lies in with a cup of tea and a good book.

c) The pleasures of being at home are only spoiled by the entire family staying home and no one being able to leave. [Tabrizia Jones et al]

Lydia: If only you were a success and we had the freedom of a manor like Darcy and Elizabeth during this cholera epidemic!

Wickham: If you say that one more time I’m going to strangle you!

Lydia: Of all the suitors I could have chosen, I had to choose YOU!

His cold politeness, his ceremonious grace, were worse than anything.
Persuasion