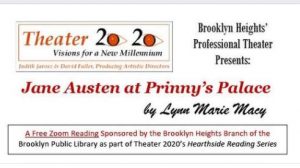 I listened and watched both parts of this work in progress. I enjoyed Part One much more than Part Two. As Part Two was during the AGM, perhaps I was too distracted. The key question I asked myself was would I travel down to NYC for this if it was on stage. After Part One, I was strongly leaning yes. After Part Two, alas no.

In Part One we meet the cast consisting of Jane Austen, Henry Austen, Madame Bigeon (Henry’s housekeeper), Rev James Stanier Clarke, and the Prince Regent himself. The interactions between the first four are generally witty and interesting. A very good representation of Jane Austen. A “Snidely Whiplash” like Prince Regent comes in at the end of Part One. A down note for me.

Part Two consists mainly of Rev Clarke “wooing” Jane Austen under the orders of the Prince Regent. Alas, I didn’t find it interesting. It appeared to me that long passages of JA’s letters were used in the dialogue. At more than a few points, I wasn’t sure exactly what was going on. I wish I had been able to stay for the Q and A with the actors/playwright after the show.

Know your own happiness. You want nothing but patience — or give it a more fascinating name, call it hope
Sense and Sensibility