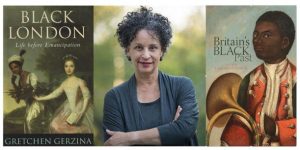 The NY Metro Region was fortunate to have noted Prof. Gretchen Holbrook Gerzina speak at our February 8 meeting, which was attended by over 300 people via Zoom.  Her talk was entitled “Sanditon, Bridgerton, and David Copperfield: Modernizing the Representation of Black People in Eighteenth and Nineteenth-Century England.” Prof. Gerzina discussed images and the lives of actual Black and mixed-race people living in Britain in Jane Austen’s period. Some of whom were servants or actors, and others who were in the middle and upper classes, such as Dido Belle. Prof. Gerzina also provided insights into the depictions of Black characters in late 18th and early 19th-century fiction such as Vanity Fair. In addition, she talked about the recent TV and film adaptations that include multi-racial or all-Black casting.

Prof. Gerzina specializes in the fields of Black British studies, Victorian studies, and African-American women’s writing. She and has appeared on podcasts and radio programs in both the UK and U.S., including the radio series, “Britain’s Black Past,” available for free on BBC Radio. She is the author/editor of nine books, including Black London: Life Before Emancipation (1995), biographies of Dora Carrington and Frances Hodgson Burnett, and Britain’s Black Past (2020). She teaches at Commonwealth Honors College, University of Massachusetts, after a distinguished career at Barnard, Vassar, and Dartmouth, where she was the Chair of the English Department.

Better be without sense, than misapply it as you do.
Emma