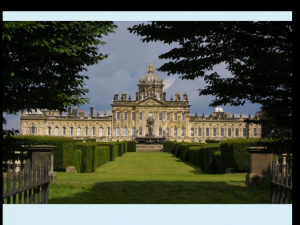 Back in December, the Genealogical Society American Ancestors uploaded their monthly lecture. Entitled  “Winter and Christmas at Castle Howard,” it was narrated by the castle’s curator, Dr. Christopher Ridgway. The 300-year-old Yorkshire castle and its grounds are not unknown to fans of the British Period Drama genre. The list of movies and television shows it has been used as a backdrop includes Brideshead Revisited (both the 1981 television series and the 2008 film reboot), Barry Lyndon, and Death Comes to Pemberley. 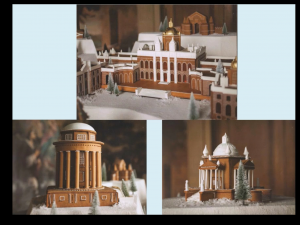 After illustrating the history of the great house, in part with early photographs and artworks, Dr. Ridgeway walked us through the process of preparing the house for winter and for Christmas tourists. (Try to guess the number of ornaments that are required for the very tall tree in the Great Hall. Puts the couple of hours I spent on our tree into perspective.) I particularly liked the gingerbread model of the main buildings. There are beautiful shots of the grounds in the snow and of various special exhibits inside the castle. All in all, a very enjoyable show.

It is always incomprehensible to a man that a woman should ever refuse an offer of marriage.
Emma