Dancing in December – JASNA-NY Celebrates Austen’s Birthday
December 16, 2016 - Cold weather did not prevent a fine turnout for our Birthday Meeting at The General Society
Read more.
An Evening with Whit Stillman
November 7, 2016 - On an evening filled with the sights and sounds of a torrential downpour, nearly 100 members
Read more.
A JASNA-NY Member Shares Her Experience at the 2016 AGM, Emma: No One But Herself
October 29, 2016 - The AGM is a Janeite’s dream come true. Surrounded by fellow Janeites from North America and
Read more.
Judging a Book by Its Cover: 70 Years of Penguin Classics
October 1, 2016 - Penguin Classics turns 70 this year, and to celebrate, members of JASNA-NY were invited to attend
Read more.
The Cooper Connection: The Fall Regional Meeting
September 12, 2016 - On Saturday September 10, members of JASNA-NY joined together an hour earlier than usual, braving both
Read more. 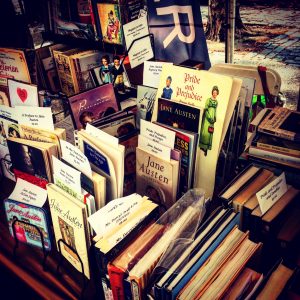 Brooklyn Becomes Booklyn
September 20, 2016 - In New York City and Brooklyn in particular, there are several signs that fall is in
Read more.
« Previous 1 … 3 4 5

For previous events, CLICK HERE for our News & Events Archive.